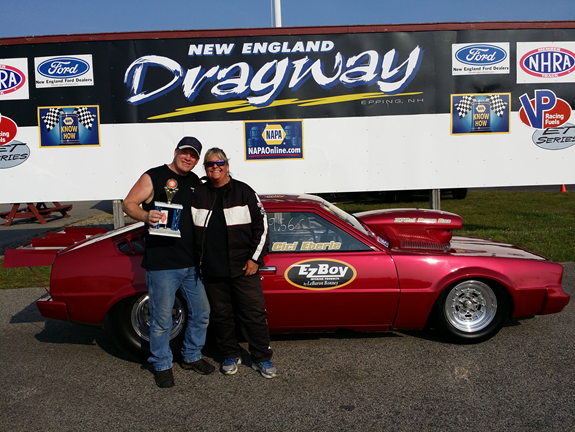 Shop Foreman, Bob Eberle, demonstrates his passion of engine rebuilding.  Each weekend, he and his wife Cici head to the racetracks. The duo has over 35 years experience restoring and racing 1960’s and 1970’s Mopars.

They have been racing and wrenching on their cars together for the last 23 years. Bob’s many years of machining experience are key to their success.  He engineers and builds all of their race engines, transmissions and rears.

They acquired their current racecar, a 1976 Plymouth Arrow back in 2006, which Cici drives.  They have won several Championships and awards.  In 2015 they made the top 10 at New England Dragway in Super Pro and participated in the NHRA Division 1 Bracket Finals as part of Team New England Dragway at Atco Dragway in Acto, NJ.

In April we were pleased to be one of 100's of exhibitors at one of the largest events offered to the solid-waste management industry.  … END_OF_DOCUMENT_TOKEN_TO_BE_REPLACED

Shop Foreman, Bob Eberle, demonstrates his passion of engine rebuilding.  Each weekend, he and his wife Cici head to the racetracks. The duo … END_OF_DOCUMENT_TOKEN_TO_BE_REPLACED

Precise Repairs and Forensic Analysis “Beyond performing precise repairs and overhauls that fully met the needs of our customers, ED was … END_OF_DOCUMENT_TOKEN_TO_BE_REPLACED

Contact us to discuss how we can work with you. 